My Amiga 600 was a car-boot sale find about 10 years ago. In an time when the Playstation 2 was past its peak I managed to buy it for £5. It came with loads of disks, PSU and a couple of joysticks.

Well, as part of my on-going project to ensure that my old tech is more usable I decided to resurrect it. First things first – did it still work? Fortunately, I not only have an old-but-good Panasonic Quintrix CRT TV, but I also hung onto my Amiga to SCART cable. This is not as trivial as it sounds. Many older games consoles and computers used standard connectors for their various interfaces that are still common today, but the Amiga’s monitor port used a 23 pin ‘D’ connector. These are all-but impossible to find nowadays. It’s possible to buy Amiga monitor cables, but most of them use the common 25 pin ‘D’ with two of the outer pins cut off – it works, but it’s hardly elegant.

I plugged everything in, flipped the power switch, and was greeted with the boot screen.

The Amiga still has quite an active community of enthusiasts, so getting hold of a new 37.350 ROM wasn’t a problem. It is also no longer necessary to use an actual hard disk drive, as its possible to use a relatively simple and inexpensive Compact Flash card adapter instead. I purchased the ROM, CF adapter and CF card from amigkit.com. The CF card came pre-loaded with auto-booting software to install the Workbench, etc. on the card.

Time to breakout the toolbox to get at the motherboard.

Replacing the Kickstart ROM is fairly straightforward, but there are a couple of gotchas. If you’re not used to dealing with ICs then know that they usually come with their pins splayed-out a bit, but to use them the pins have to point straight down. There are two mains ways of doing this – using a pin straightening tool, or carefully bending the pins against a flat surface (usually a desk) one row at a time. If you’re going to be doing this procedure a lot, then do yourself a favour and get the proper tool. They’re not expensive, get the job done reliably, and are far quicker to use.

The next gotcha results from a rather bizarre decision made by the designers of the A600 motherboard – while the Kickstart IC has (a very standard) 40 pins, the IC socket on the motherboard has 42 pins (I didn’t even know 42 pin sockets existed!). If, like me, you plug the IC into the socket incorrectly then not only will the Amiga not boot up, but the new Kickstart IC will start to get very hot indeed! I realised what had happened before the IC caused itself or the Amiga irreparable damage. The photo shows the correct orientation and alignment the IC on the motherboard of my A600 – board layouts and specs can change between revisions, however, so if you’re going to do this yourself then the best way of determining the correct way of inserting the new IC is to take careful note of how the original one is oriented/aligned.

Installing the new Kickstart IC (correctly!) yields the following on the boot screen:

Time to install the CF adapter, which is connected where the hard-drive would’ve been connected. Make sure you push hard enough to make a proper connection – when being extra careful with vintage hardware it’s easy to convince yourself (as I did) that the connector is seated properly (when it needs a bit more of a shove!).

Booting up takes you straight into the Workbench install utility that was pre-installed on the CF card – have your system disks ready and just follow the instructions.

Right, that’s the A600 up and running properly, now whatever happened to my A1200?

Ah yes – that is going to be a bit trickier:

In the quest for subjects for blog posts I think this is somewhat “low hanging fruit”.

I finally got round to retrieving my old Commodore VIC20 from my parents house. It was a present from my parents on my 14th birthday in July 1982 and changed my life. Still boxed and in pretty good condition, I was pretty confident about it still being in working order – despite having not been powered up for around 30 years.

After fitting a new plug I connected the power supply and switched it on – the red power LED fired up and no burning-smell/excess-heat was produced! On to try to get a picture from a television…

To display a picture on a TV usually involved plugging in the VIC20 to the aerial socket of the TV via the included RF modulator. The picture and sound produced by this horrible thing was pretty atrocious most of the time; the VIC20 does output video and audio directly, but most TVs back in the early 80s didn’t have direct inputs. Things are different now, of course, so it was off to the workshop to make up an AV cable.

To make an AV cable for a VIC20 you’ll need:

First, make up the video cable so that you have the phono plug on one end and stripped back inner core and shield on the other. Do the same for the audio cable.

Solder the outer shields of both the video and audio cables to the GND pin, the video to the Video pin, and the audio to the Audio pin (Duh!):

Re-assemble the plug housing (you did remember to thread the DIN plug boot onto the cables before soldering right?!) and give it a try.

Right, now where is that copy of Amok 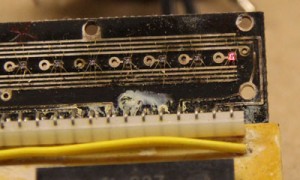