Ever have one of those projects that when you started it you paused and thought:

“Just what was I thinking?!”

My wife and I chose the house that we bought primarily for its outside space. In addition to being able to have an interesting garden there was a spot in the top corner with a great view for me to build myself a longed wished-for outbuilding for my hobbies and interests.

The site for the outbuilding (“The Pod”) has a bit of a slope, and my first intention was to level the ground by excavating the upper part of the slope, and using the earth to build up the lower part. After discussing my plans with the local planning office they told me that that constituted “Engineering Works”, and would require a planning application at a cost of over £200. I proposed that I just raise the the front of the building on supports, and was told that because I wasn’t changing the level of the ground, and that the height of the building was measured from the highest part of the ground then it would fall under “Permitted Development”, and I could just get on with it.

What to support the Pod on then? Reclaimed railway sleepers – too uneven. Concrete blocks – I’m not so good at brick and block work. I found someone online that had two RSJs (Rolled Steel Joists / I-Beams) for sale. It was probably over-engineering the problem, but at least it would do the job.

Then they turned up.

They were delivered by a team of 4 men, and with my help we barely got them off the back of the truck without breaking the paving slabs in my drive. They told me that the only reason they were selling them is that they’d underestimated the weight of them, and couldn’t actually install them. And now I had to somehow move them up the garden by myself.

They sat on the front drive for several weeks…

I donned the correct PPE; face shield, gloves, safety glasses, etc., and with my wife’s words of encouragement (“BE BLOODY CAREFUL!”) I set to work. When cut down the largest piece was still too heavy to carry; it would only move a few centimetres every time I shoved my whole weight against it. It would literally take all day moving it like that…

Yup, a whole working day later the beam was nearly at the top of the garden. I had to borrow an electric winch for the last few metres.

The matter of welding the beams to form the support was far less strenuous.

I asked my someone who has a lot more experience of building that I do whether he thought that the base would be strong enough.

“What are you going to put on it, a bloody skyscraper?!”.

Over-engineered, but not going anywhere, then.

The maker-space is finally complete. Well, “complete” in the sense that it’s 99% complete. There are always minor jobs and additions to do, as is always the case with work-spaces; they keep evolving. 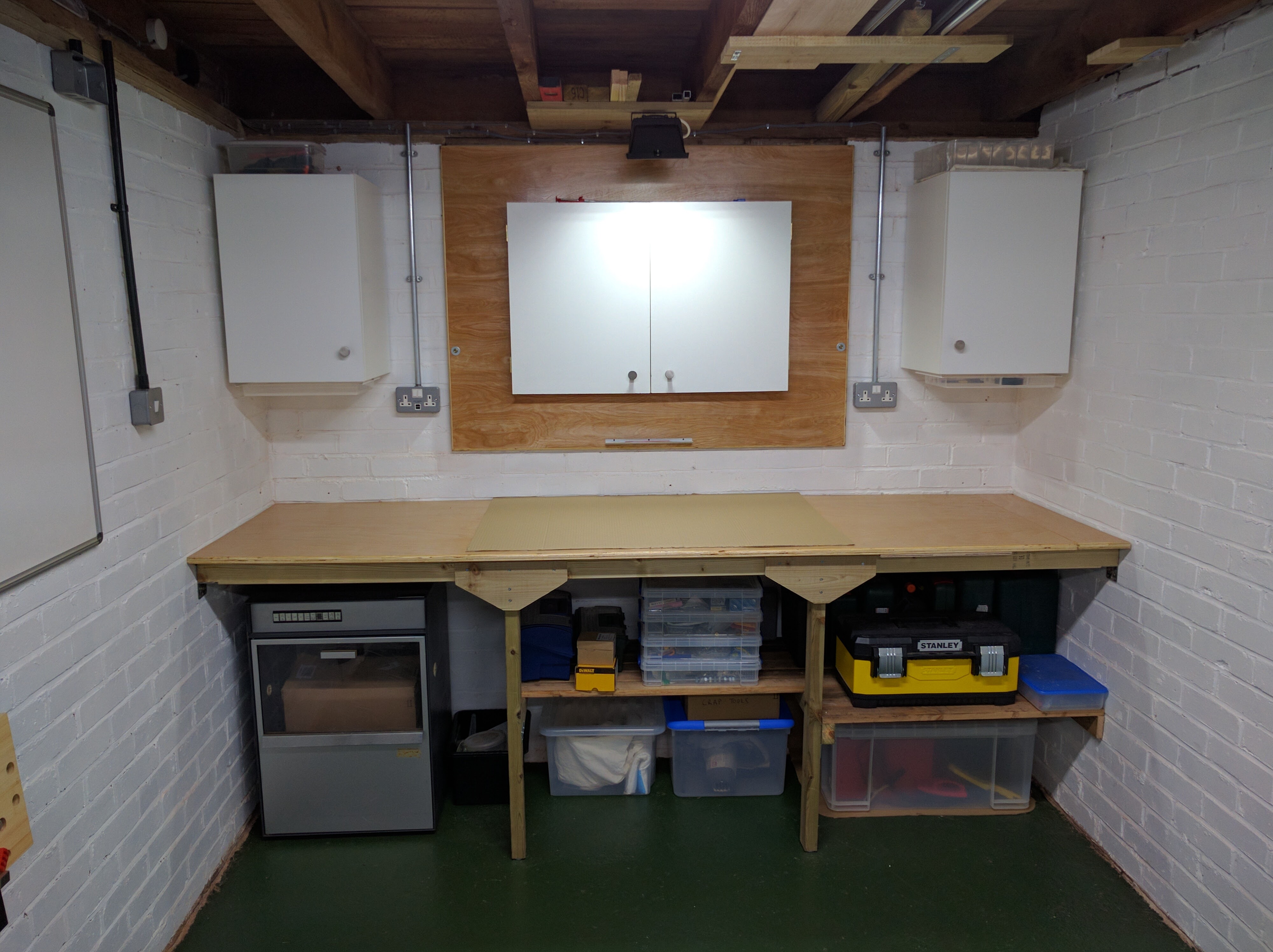 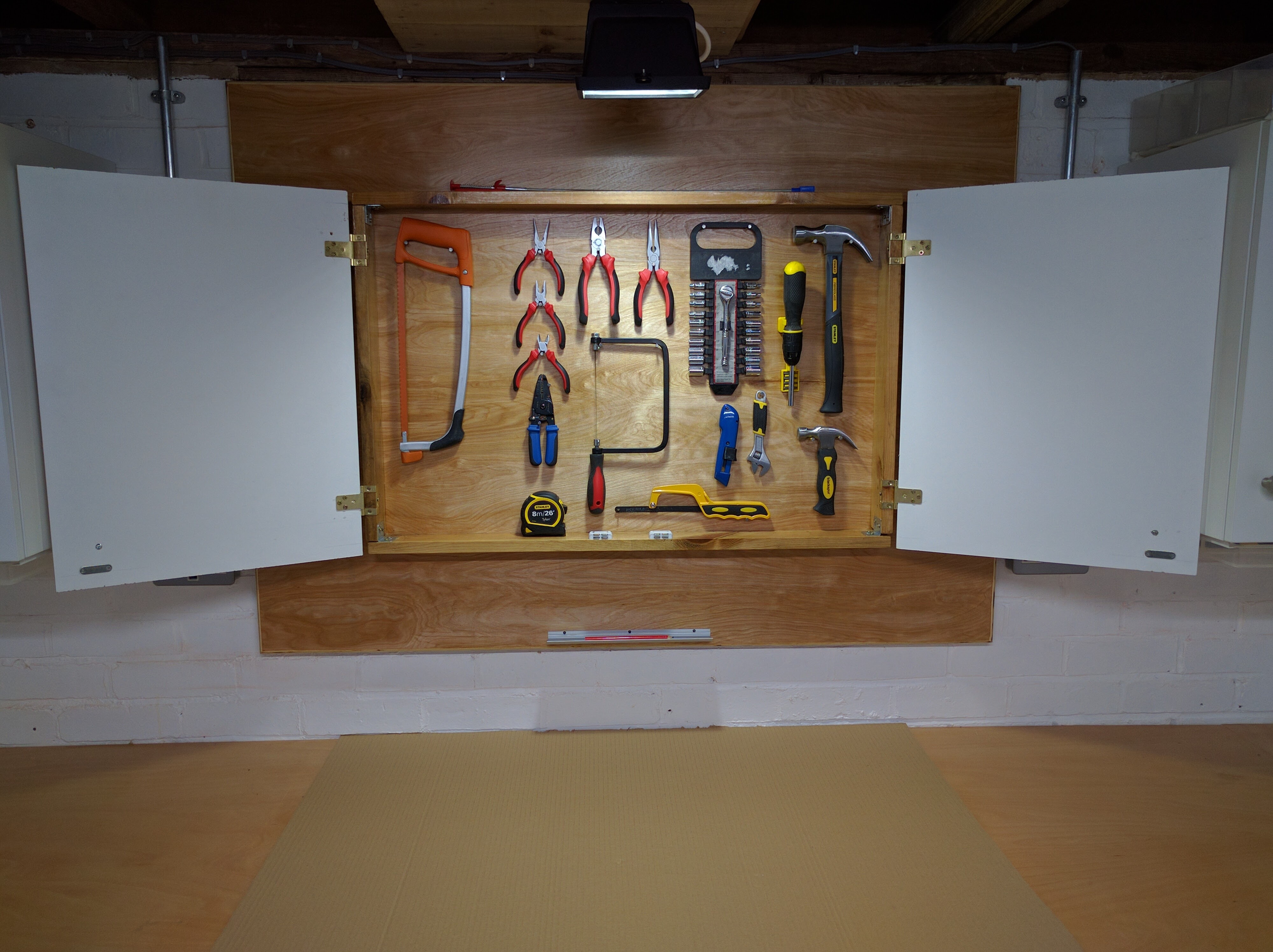 Finally got started on the workshop. I removed the wood and nails that provided the makeshift storage among the beams, then removed the faulty fluorescent light before treating all the remaining woodwork with a universal wood treatment solution. The walls were then painted with white masonry paint, and the metal beams with green metal paint.

I’m waiting for the floor paint to be delivered, and once that’s done I can think about getting the electrics installed, and fitting a bench and storage.

It was a long time coming, but I have finally moved house! After the chaos, stress and confusion of moving my prediction that I would have a functioning maker-space set up “very quickly” was hopelessly optimistic!

I’m making the setting up of this space a priority. It kind of makes sense to; a functioning workshop will be useful when working of the rest of the house.